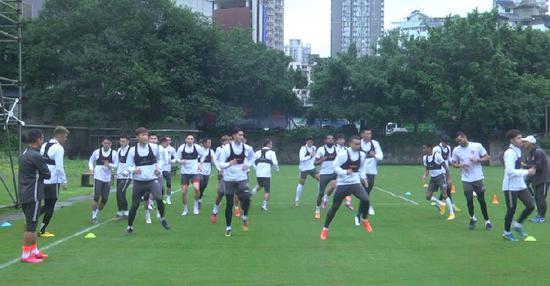 The second stage of the 2020 Chinese Super League will officially start on October 16th, and Chongqing Dangdai will go to the Suzhou Division on October 12. On the afternoon of October 8, Chongqing Contemporary team members had the first training session after the National Day holiday at the Yanghe training base, and began to prepare for the first round of the second round of the match against Jiangsu Suning. According to the upstream news Chongqing Morning Post reporter, all players returned to the team after the holiday on the evening of the 7th. After 9 days of adequate rest, everyone was in very good condition. The main content of the first training class was also recovery.

After the match against Shanghai SIPG on September 28, Chongqing Contemporary coach Zhang Wailong fulfilled his promise of "a few more days off if the game is played well" and extended the original return date from October 5 to October 7. . It’s not surprising that Zhang Wailong made such a decision. If Chongqing Dangdai fails to win third in the Suzhou Division, the first round of the second stage will be against Guangzhou Evergrande on October 16, but after Chongqing Dangdai won third in the Suzhou Division, Jiangsu Suning's game time is October 19th, so it also gets two more days off.

Upstream News·Chongqing Morning News reporter learned that the players mainly go home to accompany their families throughout the holiday. The foreign aid family has also come to Chongqing to celebrate the holiday with them. Captain Kaldek posted a happy photo with his wife and two daughters on the Internet. Sirino posted a photo of traveling with his family at Jiefangbei. Perhaps it is the thought of being able to meet with family after the first stage of the Chinese Super League, which is one of the reasons why foreign players are getting better and better in the last few rounds of the league.

can enter the Chinese Super League championship group, Chongqing Dangdai's results also satisfied the fans. In addition to fans picking up the plane at Jiangbei Airport on September 29, the first training session on October 8 also attracted many fans to watch. Xiao Zhao, a Chongqing fan who went to the Suzhou Division twice to watch the game in the first stage, was also among them. He also took photos with two foreign players, Marcinho and Sirino.

Compared with Chongqing Dangdai’s relaxation after completing the task of relegation ahead of schedule, the first-round opponent Jiangsu Suning in the second stage was waiting for it, and the early team started to prepare. As early as October 4, the team had resumed training except for Wu Xi and Li Ang who went to the national football training camp. Foreign aid Teixeira said in an interview with Brazilian media that he wants to win the championship for the team, which proves that Jiangsu Suning attaches great importance to the second stage of the game.